A version of this post was originally published here.

This post is most likely going to infuriate a lot of people, but it will hopefully help a lot of people also. And so I go forward.  I realize this is a very touchy subject and people will have lots of reactions both good and bad.  Please share your experience in the comments, but please be kind.

When I told Honey that I got a gig writing a blog here he asked me what I would be writing about.  When I told him I could write about almost anything he asked, “Will you write about breastfeeding?”  I guess my answer is yes.

My oldest daughter was born with a Torticolis and a nerve defect in her lip that until recently was thought to be Crying Facies Syndrome but in actuality was a Congenital Unilateral Lower Lip Paralysis.   The torticolis was diagnosed at two months old, after we had stopped trying to breastfeed. I was told by a neurologist when she was six months old that her nerve defect would have made it nearly impossible for her to have an effective latch. Yet I still tried everything I could for as long as I could with the help of my doctor (a family practitioner who treats all of us), lactation consultants, books, videos, and support from friends.

The process of trying to get her to feed took up to two hours. Every time. 24 hours a day. We would try to get her to latch and she would scream in pain, and I would cry, and Honey would offer support for up to fifteen minutes. Lovey would latch for a minute or two until she would come off with a look that can only be described as agony. Then Honey would get a finger feeding syringe and continue the feeding while I pumped. And cried. This went on for ten excruciatingly long days. And in another part of my life, my mother in-law was dying. But still I tried.

The advice I got from people was mostly supportive.  No one ever told me that this just might not be possible for us even though I asked the question to everyone I could, praying that someone would tell me it was okay if it didn’t work out. Some well-meaning people said some incredibly hurtful things. One person told me that I should try harder because women have done this for millions of years and I could, too. Another older woman (who in her generation was told that breastfeeding was BAD for babies) said that nighttime feedings were her happiest memories as a mother and I should try to enjoy it more. Finally my doctor gave me the advice that changed my life and said what I needed to hear most: “When any of the three of you feel like you have had enough, that’s when it’s time to stop trying. The health of your family is what is most important.” And so I waved my white flag and stopped trying to get Lovey to latch. I did continue pumping for 14 weeks because society has made women feel like failures for not giving their children breast milk. The breast is best message is EVERYWHERE. It’s even on the label for the formula.

When my second daughter was born I told myself I would try again because after all “Breast is best.” She was a good latcher but she had a bit of trouble. The problem was me. Trying to breastfeed her gave me the same reaction I can only imagine a war veteran has when they hear a car back fire. I panicked about every little thing that was going on. Was she latched correctly, was she getting enough, was I doing it right? And I should add, every time I breast-fed her Lovey would have a world’s biggest tantrum. She would fall to the floor and scream and kick her feet through the whole feeding. Sure does help with the let down! This time, Honey had to return to work and so I was alone in my journey. Therefore, once more, I made a decision that what was best for the health of my family was formula. 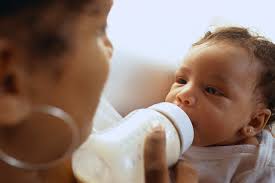 I don’t regret the choices I made for my family.  What I do regret is that I was swayed by popular opinion to do what I was “supposed” to do and not listen to what my body, my brain, and my heart were telling me to do. After my experience with Lovey, I made a vow to myself and to other women to be honest about breastfeeding. There is simply not enough education about it out there. You are in the process of picking out a pediatrician, are you really thinking of sitting down with this person and asking tough questions about your breast and mental health as they pertain to your unborn child? Probably not. Out of curiosity while updating this post I looked up “breastfeeding problems” on Google today and got over 400,000 hits.  I looked up “facial nerve defect and breastfeeding” and came up with two, from the same source.

And so, the responsibility falls to us as women to educate other women in an honest and open way about all of it. Not just the “it was an incredible bonding experience” and “it’s the most wonderful feeling” and “I lost all my baby weight.” The sore, bloody nipples. The sleepless nights. The marathon feeding sessions. The stress and trauma of trying to feed your baby in the early weeks. It’s not for everyone. I applaud those of you who push through and respect your decision. But please in turn respect mine. The women I know who didn’t breastfeed talk about it in secret because the women who did and are advocates for it are so vocal.  That is OK; be vocal about an experience that was positive for you, but allow those for whom it wasn’t positive to be vocal too. That way we as women can help effectively educate future mothers about every detail that is involved with feeding your infant. That, I’m sure we can all agree, is what’s best.

Vulnerability is strength, not weakness.

Compassion is always the solution.